Until recently, natural progesterone could not be administered orally as it was broken down in the gastrointestinal tract. Micronised progesterone preparations are now available in some countries but synthetic progestogens are the most widely used. They are divided into two groups. The testosterone analogues include norethisterone, norgestrel and the norgestrel derivatives, i.e. desogestrel, norgestimate and gestodene. Progesterone derivatives are allyloestrenol, dydrogesterone, hydroxyprogesterone and medroxyprogesterone. Progestational agents have many uses in gynaecology.

They are prescribed for contraception, menorrhagia, dysmenorrhoea, premenstrual syndrome, endometriosis, threatened miscarriage and adjuvant therapy for endometrial carcinoma. Progestogens are also added to oestrogens in hormone-replacement therapy in women being treated for perimenopausal symptoms.

The effects on reproductive function depend on several factors including the molecular structure, i.e. whether the drug is a progesterone or testosterone derivative, the dose and the duration of administration. Progestogen-only contraception Progestogen-only contraception is often prescribed to women in circumstances where oestrogen-containing oral contraceptives are contraindicated. This group includes older women, smokers, breast-feeding mothers, etc. The drug is taken at the same time each day throughout the month and exerts a contraceptive action at several sites. The cervical mucus becomes thick and resistant to the passage of sperm, the endometrium is rendered unfavourable for embryonic implantation, smooth muscle motility in the fallopian tube is reduced and, in approximately 50% of women, ovulation is suppressed.

Progestogens may be administered by other routes as long-acting contraceptives. Intramuscular injections have been available for several years but recent developments include progesterone-containing vaginal rings, intrauterine coils and subcuticular implants. There is evidence from one study that women discontinuing the intramuscular depot progestogen medroxyprogesterone acetate (Depo-provera) take longer to conceive than women stopping the combined contraceptive pill and those discontinuing conventional intrauterine contraceptive devices. Two years after cessation of contraceptive measures, there was a significantly lower cumulative conception rate in Depo-provera users than in combined contraceptive pill users. This probably results from a residual effect of the drug in some women.

Progestogens in other indications 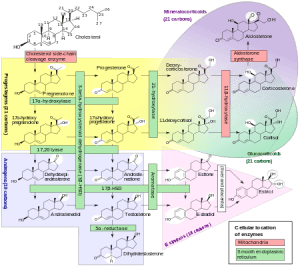 Progestogens are frequently prescribed for the management of abnormal menstrual bleeding. In this indication, they are usually prescribed cyclically, e.g. in the last 2 weeks of the menstrual cycle. With this duration of administration, they do not interfere with ovulation and, therefore, do not significantly interfere with fertility. However loss of libido is a recognised side effect.

In the treatment of endometriosis, progestogens may be prescribed continuously for 3 months or more. This period of administration usually provokes amenorrhoea secondary to suppression of ovulation, and transient infertility will result.
In men, progestogens have also been investigated for treatment of benign prostatic hypertrophy. The use of an injectable preparation, gestonorone, administered once a week for 2 to 3 months led to subjective and objective evidence of improvement of prostatic symptoms but was associated with impotence in two thirds of the 30 men treated.