Airway responsiveness to AMP was assessed using a standardized dosimetric method, as described in detail previously. AMP (Sigma Chemical; St. Louis, MO) was dissolved freshly in 0.9% saline solution to produce a doubling concentration range of 0.39 to 400 mg/mL. Each solution was administered from a jet nebulizer attached to a breath-activated dosimeter (model MB3; Mefar; Brescia, Italy) at a nebulization time of 1 s with a pause time of 6 s. The nebulizer delivers particles with an aerodynamic mass median diameter of 3.5 to 4.0 pm at an output of 10 pL per breath. Patients inhaled the aerosolized AMP solutions in five inhalations from functional residual capacity to total lung capacity through a mouthpiece with the patient’s nose clipped. Normal saline solution was inhaled initially, followed by five breaths of doubling concentrations of AMP at 2- to 3-min intervals. Single measurements of FEVl were made 60 to 90 s after the inhalation of each concentration, unless the forced expiratory maneuver was judged to be technically unsatisfactory. The test was interrupted when a fall in FEVl of at least 20% from the post-saline solution value was recorded or the maximum concentration had been administered. The PC20 was calculated using a formula given by Cockcroft. 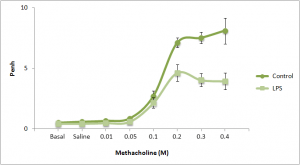 ENO concentration was measured on-line by the restricted-breath analysis according to the recommendations of the American Thoracic Society using a chemiluminescence analyzer (NiOx; Aerocrine; Solna, Sweden), as described in detail previously. Briefly, the patient was instructed to inhale through the mouth to total lung capacity and immediately exhale through the mouthpiece against a fixed resistance. Patients inhaled ambient air that was passed through a filter to reduce inhaled nitric oxide concentrations to < 5 parts per billion (ppb). Maintenance of a constant flow was achieved using a visual feedback display on the computer screen. A flow rate of 45 mL/s was used. An exhalation of 10 s with a plateau of at least 3 s in duration was required to calculate the nitric oxide plateau. Patients repeated the maneuver until three acceptable tests were performed, and the average of the three plateau values was recorded. 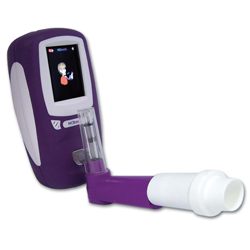 Data were analyzed with standard statistical software packages (SPSS, version 10.0 for Windows; SPSS; Chicago, IL; and InStat for Windows, version 3.00; GraphPad Software; San Diego, CA). Variability in PEF was calculated with the following formula: (maximum PEF – minimum PEF)/mean PEF of the day X 100. All PC20 and ENO values were log-transformed before analysis and presented as geometric means with 95% confidence intervals (CIs). All other numerical variables are reported as arithmetic means with 95% CI.

Comparisons of the baseline characteristics between groups were performed by unpaired t tests for continuous data and by Fisher exact tests for categorical data. Possible predictors for failure of ICS reduction were determined using log-rank test. Kaplan-Meier survival curves were used to demonstrate the probability of failure of ICS reduction between subjects with increased and those with normal responsiveness to AMP, and between patients with normal ENO concentrations and those with increased ENO. For PC20, the cut-off points evaluated were 400 mg/mL at baseline and one doubling concentration increase over the baseline value 2 weeks after the dose of ICS was halved.

PC20 at the time of exacerbations was not determined in two patients for safety reasons.

There were no significant differences in clinical characteristics, pulmonary function, or ENO levels at baseline between the groups that did and did not have exacerbations (Table 2). A higher responsiveness to inhaled AMP was found in patients with exacerbations, but this difference was of marginal significance (p = 0.07).

Figure 2 shows the survival curve using the modifications of PC20 and ENO values 2 weeks after the dose of ICS was halved. Having a decrease in PC20 (cut-off point, one doubling concentration) was a borderline significant predictor for failure of ICS reduction (p = 0.062), whereas having an increase in ENO levels (cut-off point, 10 ppb) was not a predictor for failure of ICS reduction. Only three patients showed both a decrease in PC20 values greater than or equal to one doubling concentration and an increase in ENO > 10 ppb. 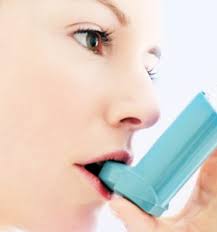 The results of the present study suggest that, in asthmatic patients with their disease already stabilized and well controlled by use of ICS, measurements of AMP responsiveness and ENO levels can be used to predict the success or failure of reduction in ICS dose.


If you liked our article, subscribe to our Twitter Canadian Health Care Mall and stay tuned medicine!