The follow-up of approximately 4000 patients treated world-wide with papaverine alone or in combination with phentolamine has been published8, in addition, long-term results with intracavernous injection therapy based on prostaglandin E1 have been reported. 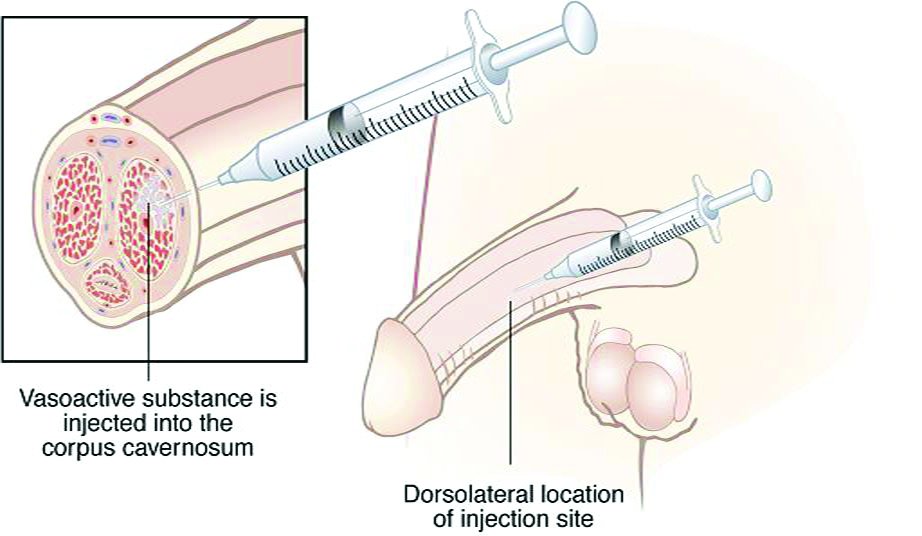 This problem has been reported in 1.5–60% of patients treated for 1 year. We believe that most of the fibrotic nodules occur in patients who inject themselves very frequently (multiple traumas to the corporeal tissue) and who do not compress the injection site for a sufficient amount of time, with the subsequent development of intracavernous hematomas.

The role of intracavernosal vasoactive therapy in promoting a return of spontaneous erections is controversial. An increase in the frequency of spontaneous erections and a decreased need for treatment is a common finding during follow-up of intracavernous vasoactive injection therapy. It has been demonstrated that the chronic use of prostaglandin E1 intracavernous injections is able to improve cavernosal artery function markedly as shown by color Doppler sonography16. The improved hemodynamic response seen in patients chronically injecting themselves may be explained on a microvascular level.

It has been shown that the long-term administration of vasoactive agents in monkeys causes hypertrophy of sinusoidal smooth muscle at the ultrastructural level. Both papaverine and prostaglandin E1 lead to a hypertrophic response, but papaverine results in a combination of hypertrophy, atrophy and fibrosis, whereas with prostaglandin E1 the normal cellular architecture is preserved. With the sinusoidal muscle ‘toned up’ after long-term self-injection with prostaglandin E1, the efficiency of sinusoidal smooth muscle action may improve, leading to the observed increase in cavernosal artery flow. In addition, it has been shown that prostaglandin E1 may improve the hemodynamic response partly by promoting neovascularization.

This issue remains controversial, as Wespes and colleagues17 were unable to demonstrate any significant changes of the intracavernous structure following long-term treatment with intracavernosal alprostadil. In this study, a total of ten patients underwent biopsy of the corpora cavernosa before and after a 3-year treatment with alprostadil (overall, 150–250 injections per patient). No histological difference was observed with classic staining. A reduction was noted in the percentage of intracavernous smooth muscle after treatment in two of five patients on the side of injection, but there was no difference with the other corpus cavernosum.

No difference was observed in the percentage of intracavernous smooth muscle between both corpora in the five patients with biopsies performed only after treatment. A recent study by Brock and associates supported the contention that long-term intracavernosal alprostadil therapy acts on the penile smooth muscle to improve the erectile response, and promotes the return of spontaneous erection. In this study, 70 men with a stable heterosexual partner entered the titration phase, and the effective alprostadil dose was determined before entry into the 12-month self-treatment home phase. Duplex ultrasonography was used to measure the peak systolic velocity and diameter of the cavernosal arteries throughout the study.

An effective dose was established for 67 (96%) of the 70 men (median dose of alprostadil 15 μg). During the home phase, 94% of men responded to alprostadil and the median dose remained unchanged. Complete duplex ultrasound data were obtained in 38 men, and showed significant increases in post-injection peak systolic velocity in both cavernosal arteries.

The issue of the curative effects of intracavernosal injection therapy yet remains clinically controversial, as in another study nocturnal penile tumescence activity remained unchanged after long-term intracavernous injection use19. In this study, Maniam and coworkers enrolled 19 men with organic erectile dysfunction; all patients underwent nocturnal penile tumescence testing before and after alprostadil-based intracavernous injection therapy of at least 6months in duration. A five-item questionnaire was used to assess subjective changes in erectile activity over time.

In this study, mean time on intracavernous injection therapy was 2.4 years and mean injection frequency was 3.7 times monthly. Nine patients believed that unaided erection improved after intracavernosal injection, and six achieved intercourse without injection who were unable to do so before injection. However, no statistically significant changes were noted in any of the five objectively measured nocturnal penile tumescence parameters.